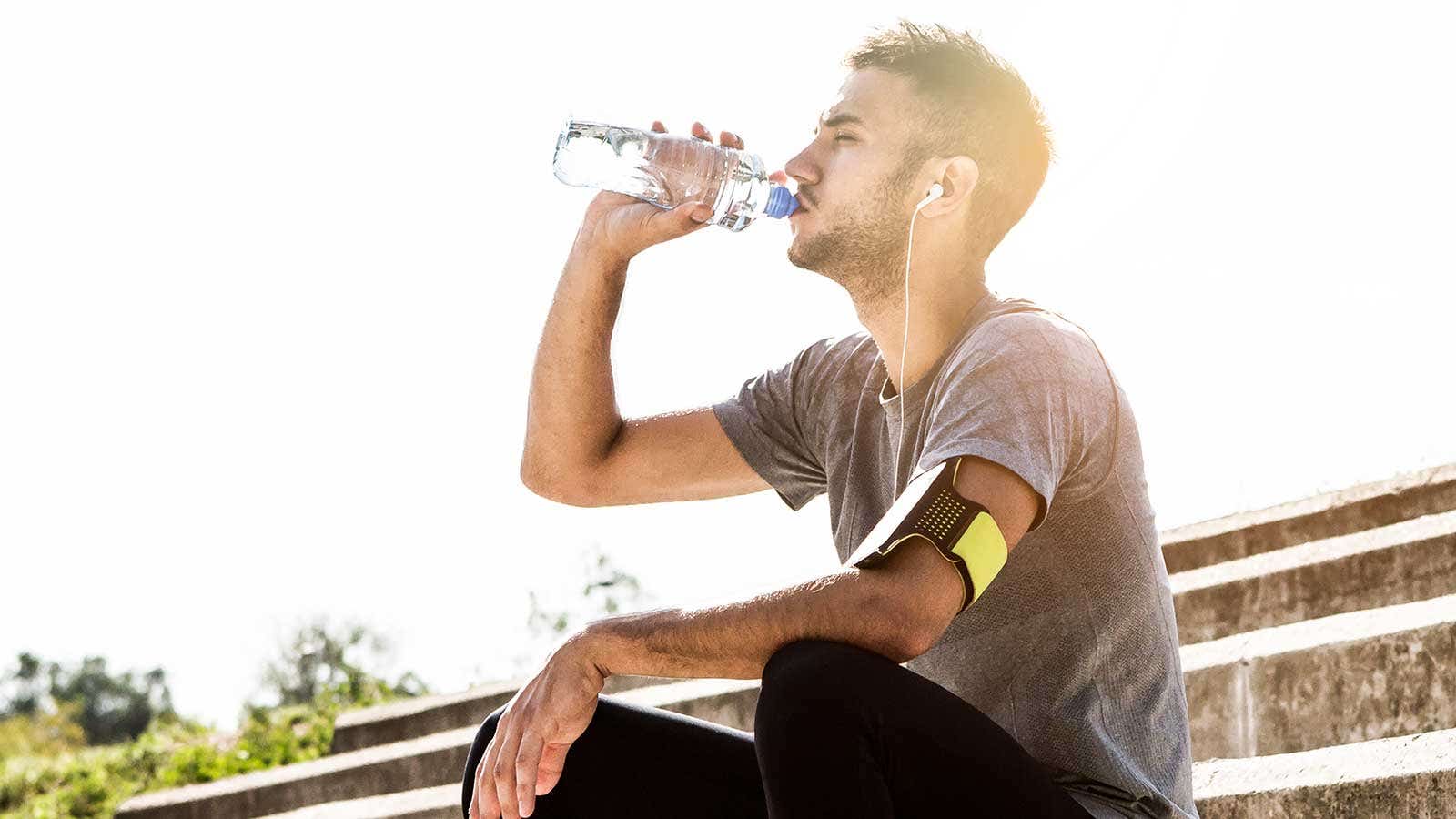 A 35-year-old male triathlete presents to a clinic for medical assessment after reporting a 3-year history of palpitations each time he drinks ice-cold water after physical training.

He tells clinicians that his heart rate during these spells has been up to 150 beats/min.

Results of a physical examination are unremarkable.

Findings of a basal electrocardiogram show normal sinus rhythm and no abnormalities of PR interval, QRS duration, or QT interval.

Echocardiography reveals that the size and wall thickness of his left ventricle are normal, as is his systolic and diastolic function.

There is evidence that his aortic root is mildly dilated and clinicians note slight mitral and tricuspid regurgitation. The volume of his left atrium is normal.

The patient undergoes a technetium (99mTc) tetrofosmin stress test, which shows an estimated ejection fraction of 58% in the absence of exercise-provoked perfusion or wall motion abnormalities.

The patient has good exercise tolerance — testing reveals his heart rate is 98% of the age-predicted maximum.

Findings of a barium study of the upper gastrointestinal tract are normal.

The patient undergoes 24-hour Holter monitoring, which shows a sinus rhythm marked by an intermittent isolated supraventricular ectopic beat, and a period of atrial fibrillation (160-200 beats/min) lasting about 2 hours, which is noted to coincide with the patient’s reported episode of “racing heartbeat” after drinking ice-cold water.

The patient agrees to undergo a provocation study, in which drinking the ice-cold water again triggers an episode of atrial fibrillation, while his sinus rhythm remains unchanged when he swallows room-temperature water.

Although clinicians prescribe beta-blockers, the patient continues to experience these episodes with the same frequency.

In light of the specific connection between cold-water ingestion and atrial fibrillation, clinicians opt to stop treatment to avoid interfering with the athlete’s physical training.

Instead, he is advised simply to stop drinking ice-cold water, which resolves his episodes of racing heartbeat, according to his report about a year later.

Clinicians reporting this case suggesting a link between ingestion of ice-cold water after physical activity and occurrence of atrial fibrillation note that at least three notable factors were involved in precipitating the arrhythmia: the mechanism of swallowing, the increased vagal tone after physical exertion, and the ice-cold water ingestion.

Authors cite research linking mechanical stimuli with induction of this kind of tachycardia, such as the distension caused by food passing through the esophagus, which may stimulate the left atrium.

However, they note that this effect has not been consistently reproduced, citing another study in which dry swallowing resulted in this effect about 50% of the time.

Nevertheless, they point out that an increase in intraesophageal pressure activates both afferent and efferent branches of the vagus nerve, leading to a vasovagal response that could lead to atrial fibrillation by triggering atrial ectopic activity.

After physical activity, this athlete’s increased vagal tone would have the potential to trigger atrial fibrillation after drinking water, case authors add:

“In fact, vagal stimulation of the atrial myocardium is able to shorten the refractory period of atrial tissue and induce atrial ectopic activity leading to circuitous pathways and resulting in supraventricular tachyarrhythmias.”

Still, they point to other data that implicate potential effects of the sympathetic system, as was demonstrated in a patient who experienced swallowing tachyarrhythmia after an increase in atropine and catecholamines.

Noting that their patient’s symptoms were only triggered when he swallowed water that was ice-cold, and not with room-temperature water, authors suggest his reaction may have been due to “an activation of cold esophagus thermoreceptors leading to an adrenergic reflex; the consequent sympathetic hypertone would cause asynchrony in the recovery time, with a focal re-entry and subsequent atrial tachyarrhythmias.”

Recently, increases in cold oxidative stress parameters have been proposed to have a role in triggering atrial fibrillation, case authors note.

“One of the interesting things is that the ice-cold water ingestion and the consequent adrenergic response happened just as physical activity stopped and the vagal tone prevailed on the sympathetic one,” they note, suggesting that the “autonomic conflict” with sudden co-activation of the afferent and efferent branches of the autonomic nervous system might underlie swallowing-induced atrial fibrillation.

While the symptoms can be managed satisfactorily with various medications including beta-blockers, class I antiarrhythmic drugs, verapamil, and amiodarone, the unknown cause of swallowing-induced arrhythmias may mean that treatments could worsen them.

Furthermore, surgical approaches such as repositioning of the esophagus or denervation or removal of direct stimulation are viewed as an extreme choice, the authors explain.

Although athletes are universally considered to be healthy, the authors point out several studies showing that their risk of atrial fibrillation is two to 10 times higher than that seen in inactive individuals, with more middle-age athletes than young athletes affected.

While left atrial enlargement, left ventricular remodeling (hypertrophy and dilatation), and an increased parasympathetic tone may be at play, the reasons for this increased risk have yet to be clarified, they note.

The pattern of development of atrial fibrillation in adult athletes is determined by the degree of dilatation, an increase in the volume of the left atrium (from baseline values), and the number of training hours over the entire sports career, according to one study cited by case authors.

In general, “physical activity for more than 10 hours per week for at least 10 years is significant in terms of the risk of arrhythmia,” according to the study.

The triathlete’s case suggests that esophageal stimulation may be among several potential triggers of clinical tachyarrhythmias, such as swallowing-induced atrial fibrillation, the case authors conclude, adding that both vasovagal and adrenergic reflexes appear to be involved. Further studies are needed to clarify “whether a swallowing-induced tachyarrhythmia is simply a direct cause-to-effect phenomenon or a more complex one involving a neural mechanism.”

Kate Kneisel is a freelance medical journalist based in Belleville, Ontario.

The authors had no disclosures to report.