Over 73% of U.S. Adults Overweight or Obese | MedPage Today

Primary Care>Obesity  –  Over 73% of U.S. Adults Overweight or Obese 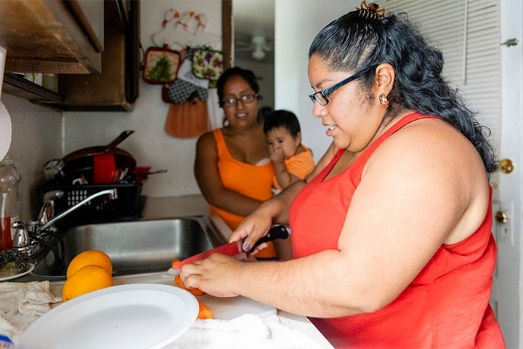 About 42% of American adults had obesity in 2017-2018, National Health and Nutrition Examination Survey (NHANES) data showed.

Among adults ages 20 and older, 42.4% were identified as having a body mass index (BMI) of 30 or higher, while 9.2% had severe obesity, defined as a BMI of 40 or higher, reported Cheryl Fryar, MSPH, of the National Center for Health Statistics in Hyattsville, Maryland, and colleagues.

When the results were stratified by age, adults 40 to 59 saw the highest rates of obesity, with 45% of this age group with a BMI of 30 or higher. Middle-aged men had the highest prevalence of obesity, at a rate of 46%.

Not surprisingly, the rates of obesity also varied according to ethnicity.

Most notably, non-Hispanic Asian Americans consistently and overwhelmingly had the lowest rates of obesity, with only 18% and 17% of Asian men and women having a BMI over 30 in the most recent survey period.

On the other hand, Mexican American adults had some of the highest rates, with 51% of men and 50% of women with obesity. Similarly, 41% of non-Hispanic Black men had obesity, as did 57% of Black adult women.

« Although BMI is widely used as a measure of body fat, at a given BMI level, body fat may vary by sex, age, and race and Hispanic origin, » Fryar’s group wrote. « In particular, research suggests that health risks may begin at a lower BMI among Asian persons compared with others. »

The current prevalence of obesity in the U.S. is in stark contrast to what the nation looked like several decades ago.

In national data from the survey period of 1960-1962, only about 13.4% of adults had obesity and less than 1% had severe obesity. And during that same survey period, about 31.5% of American adults were considered overweight.

But since the turn of the century, the rise in obesity rates seemed to slow down a bit despite still increasing. For example, the only times that obesity rates actually fell in the past 60 years was in 2007-2008 and again in 2011-2012.

In addition to this, another 16.1% of U.S. children were overweight during the 2017-2018 survey period, defined as at or above the 85th percentile on the sex-specific BMI-for-age growth chart.

At this time, the rates of obesity were highest among teens: 21% of those ages 12-19 had obesity, with the rates for teen boys slightly higher than for teen girls (23% vs 20%).

Again similar to the situation in adults, obesity in American kids followed a trajectory over the past several decades. In the 1971-1974 survey period, only 5% of U.S. kids had obesity, with only 1% of this subset having severe obesity; only 10% of kids were then overweight.