— On the other hand, lean mass appeared to be protective 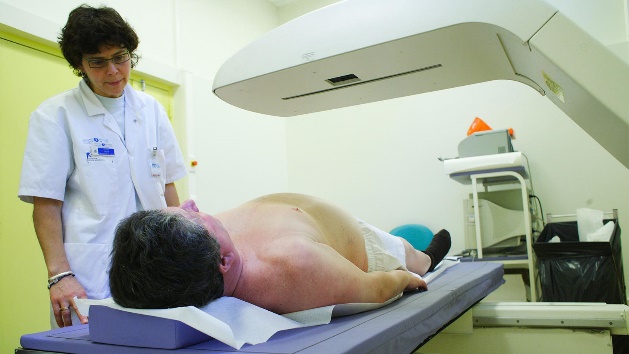 Patients with obesity — especially men with the highest levels of body fat — may be at increased risk for fractures despite their high body weight, new research suggested.

An analysis of dual x-ray absorptiometry (DXA) data from a diverse U.S. population of more than 10,000 individuals found the relationship between body weight and bone density may be more complicated than originally thought, Rajesh Jain, MD, and Tamara Vokes, MD, both of the University of Chicago, wrote in the Journal of Clinical Endocrinology & Metabolism.

The researchers said the positive effect of lean mass on bone mineral density (BMD) was similar in men and women, but the negative effect of fat mass was more pronounced in men: 0.13 lower T-score per additional 1 kg/m2 versus 0.08 lower in women (P<0.001 for interaction).

« While lean mass had an overall stronger effect than fat, the negative effects of fat on BMD were particularly pronounced in men and in those with the highest levels of fat, » they added.

These findings are particularly clinically relevant since they suggest that obesity could lead to declines in BMD in patients who are not typically considered at high risk for fracture and thus may not undergo DXA screening.

« Unlike prior work which has been limited by referral bias and/or small numbers, our findings reflect the general U.S. population and suggest that obesity alone does not guarantee against low BMD and should not dissuade clinicians from assessing bone density, particularly if other risk factors are present, » the duo concluded.

Jain and Vokes analyzed data from the National Health and Nutrition Examination Surveys for 2011 to 2018.

This data included body composition and DXA measurements for 10,814 individuals ages 20 to 59.

The researchers used linear regression models with total body BMD as the outcome.

They examined the effects of lean mass and fat mass while controlling for age, gender, race/ethnicity, height, and smoking status.

A key part of the statistical analysis, however, was teasing out the interrelated effects of fat and lean mass on bone density, the researchers noted.

« When examining the separate effects of lean mass and fat mass, it is important to recognize that both measures are correlated with one another and with body weight or BMI, » they explained.

« Excessive collinearity can result if variables have high correlation and requires careful inspection of analytic models to avoid — this is a particular concern if body composition and body weight or BMI are entered into the same model. »

Previous studies that examined the effect of fat mass on bone density have reported inconsistent relationships: positive, negative, and even neutral.

However, those studies used different statistical methods, the researchers pointed out.

They also said some of those studies are outdated — 15 to 20 years old — and may not reflect current trends in severe obesity, which has been increasing substantially in the U.S.

In addition, the densitometer used in the current study, the Hologic Discovery, has a higher weight limit (450 lbs) than many previous densitometers and may have allowed for examination of higher levels of obesity than previously studied.

Limitations of the study noted by the researchers included the age range, which was limited to adults under age 60.

It’s possible the relationship between body composition and bone mass is different in older adults, they said.

Furthermore, the study didn’t assess other factors, in addition to sex hormones, that might explain the gender differences discovered in the relationship between fat mass and bone density.

« Though we did not find conclusive evidence that fat distribution affects BMD, we cannot rule out that differences in abdominal visceral fat or other body distribution factors not analyzable in our study could play a role in gender differences in the effect of fat mass on BMD. »

Jeff Minerd is a freelance medical and science writer based in Rochester, NY.

The Journal of Clinical Endocrinology & Metabolism