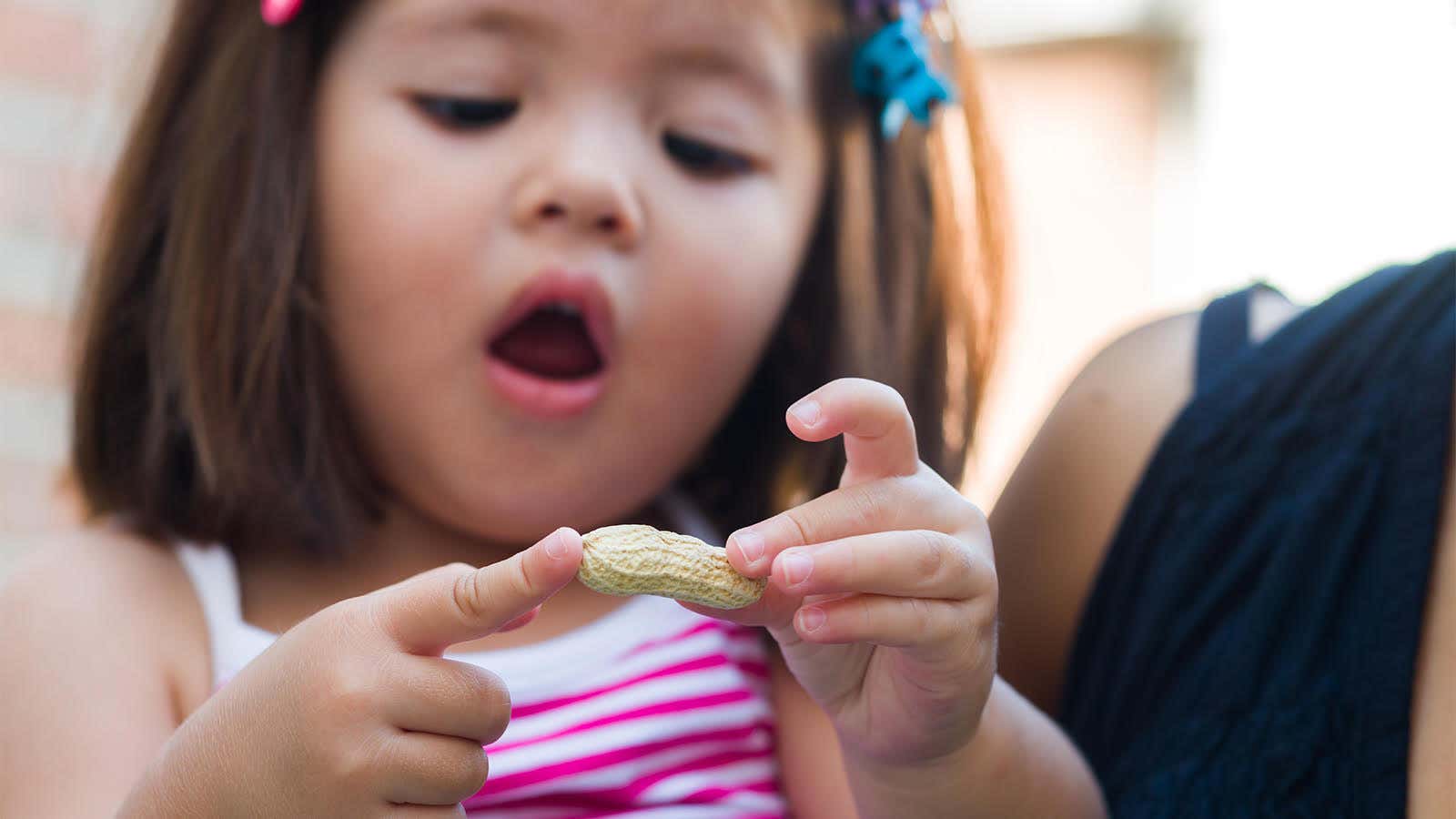 Children under 4 years of age with peanut allergies had significantly higher desensitization and remission rates with oral immunotherapy versus placebo, and younger age appeared to predict better outcomes, the randomized IMPACT study showed.

Among 146 children ages 1 to 3 years, 71% of those assigned to peanut flour oral immunotherapy became desensitized to a 5,000 mg peanut exposure at week 134, as compared with 2% of kids assigned to a placebo flour (P<0.001), according to Stacie Jones, MD, of Arkansas Children’s Hospital in Little Rock, and collaborators.

And 21% of participants on the oral immunotherapy achieved remission, or sustained desensitization, at the 160 week mark, versus 2% of the placebo patients (P=0.0021), the study group reported in The Lancet.

« The landmark results of the IMPACT trial suggest a window of opportunity in early childhood to induce remission of peanut allergy through oral immunotherapy, » said NIAID Director Anthony Fauci, MD, in a statement from the NIH, which helped fund the trial.

« It is our hope that these study findings will inform the development of treatment modalities that reduce the burden of peanut allergy in children, » Fauci said.

Currently, there are no approved peanut immunotherapies for this age group.

The only oral immunotherapy for peanut allergies approved by the FDA is for children ages 4 to 17 years.

The American Academy of Pediatrics, meanwhile, recommends that infants be exposed to peanuts as early as 4 months of age to reduce the risk of allergies, but these guidelines have not caught on.

« Early childhood peanut oral immunotherapy is, in our view, ready for immediate real-world implementation, given evidence of higher efficacy and similar safety to oral immunotherapy for older individuals, » argued Matthew Greenhawt, MD, of the Children’s Hospital of Colorado, and colleagues, writing in a corresponding editorial.

« Waiting for regulatory approval for commercial products for very young children for this treatment to be deemed ready does not benefit families, » Greenhawt and colleagues continued.

« Commercial products represent an option to choose but are not a necessity when the flour used in IMPACT is cheap and widely available for purchase in stores and online. »

In the U.S., approximately 2% of children have a peanut allergy, according to the study, and these children run the risk of accidental exposure and anaphylaxis.

From August 2013 to October 2015, IMPACT randomized 146 children ages 1 to 3 years at five academic medical centers across the U.S. to either the peanut powder (made by the Golden Peanut Company) or an oat flour placebo, in a 2:1 ratio.

Children were screened for a history of peanut allergy, peanut-specific IgE levels of 5 kUA/L or higher, a skin prick test wheal size greater than that of saline control by 3 mm or more, and a positive reaction to a cumulative dose of 500 mg or less of peanut in a blinded food challenge.

Participants were excluded if they had a history of severe anaphylaxis to peanuts, uncontrolled asthma, or uncontrolled atopic dermatitis, among other criteria.

Participants in the study went through a four-phase protocol:

At 134 weeks and 160 weeks, participants were evaluated by a double-blind, placebo-controlled food challenge with 5,000 mg of peanut powder.

For children who received the peanut powder, five of seven participants (71%) ages 1 to 2 years achieved remission, while eight of the 43 participants (19%) who were 3 years old did.

Of the 96 participants randomized to peanut flour, 70 completed the immunotherapy course.

The researchers noted that the participants who discontinued before completing the week 160 food challenge had a higher skin prick test to peanut at screening than that of participants who completed the whole course (17.0 mm vs 14.5 mm, P=0.012).

Jones’ group cautioned that while the study looked at children ages 1 to younger than 4 years, only 12% of children were between 1 and 2 years old.

They also acknowledged that there was a high dropout rate during the last phase of the study, especially in the placebo arm, that may have impacted the results.

The study was funded by the National Institute of Allergy and Infectious Disease and the Immune Tolerance Network.