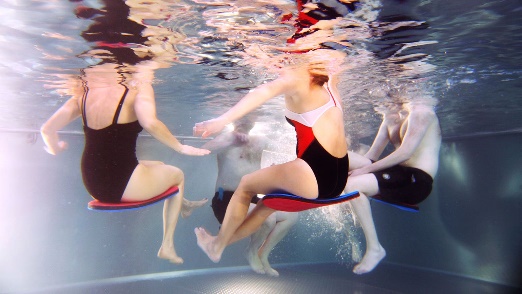 A program of water exercises was more effective than infrared thermal therapy and transdermal electrical nerve stimulation (TENS) for relieving chronic lower back pain in a randomized trial with a full year of follow-up, researchers reported.

Roland-Morris Disability Questionnaire scores, which can range from 0 to 24, were 3.61 points lower in the water exercise group at 12 months (95% CI -1.58 to -5.63) in the 113-patient trial, according to Meng-Si Peng, MSc, of Shanghai University of Sport in China, and colleagues writing in JAMA Network Open.

The difference actually grew during follow-up. At 3 months, immediately after the treatment period ended, it stood at -1.77 points in favor of the water exercises, reaching -2.42 points at 6 months. The P value for overall differences between groups over time was <0.001.

How much the watery aspect contributed is unclear. The main point, Peng and colleagues concluded, is that the results support « active exercise rather than relying on passive relaxation » as the best approach to low back pain.

But the trial is also the first to examine water exercises as a back pain therapy with this length of follow-up, the group asserted.

Peng and colleagues enrolled patients ages 18 to 65 with maximum pain intensities of at least 3 on a standard rating scale, localized in the area between the bottom rib and buttock band (with or without associated leg pain), of at least 3 months’ duration. At baseline, mean Roland-Morris scores were 8.82 in the water exercise group and 8.37 among controls; mean average past-week pain scores were 3.96 and 4.02, respectively.

The researchers didn’t label their exercises as « aerobics » but many of the seven that constituted the core program were of substantial intensity and were similar to those billed as « water aerobics«  in the West.

The program began with a 10-minute warm-up before proceeding to the main portion, which lasted 40 minutes and included the following:

A 10-minute cooldown involving stretches and passive floating concluded the session. Participants underwent a total of 24 sessions over 12 weeks.

The comparator therapy was delivered on the same schedule and consisted of 30 minutes of TENS treatment plus 30 minutes of infrared therapy, both applied to pain points.

Of course, participants were not blinded to their assignments, but the investigators who analyzed results were.

Besides the primary outcome measure of Roland-Morris scores, evaluations included pain scores, the 36-item Short-Form Health Survey, self-ratings of anxiety and depression, scores on the Pittsburgh Sleep Quality Index, and other instruments. Participants were also asked to provide overall assessments of their assigned intervention and whether they would recommend it to others.

In all cases, these favored the water exercises, and mostly with statistical significance. By month 12, mean average past-week pain scores had declined to 2.27 with exercises, versus 3.71 in the control group, for a between-group difference of 1.74 points (P<0.001). Findings were similar for maximum pain and pain as rated on the day of evaluation.

Just over half of the water exercise group achieved at least 2-point improvements in their worst pain — considered the minimum for clinical significance — compared with 21% of controls.

Limitations included the inability to determine whether specific components of the interventions were more effective than others, and the relatively small sample. Also, the choice of TENS and infrared therapy as the control could be seen as a limitation, as other forms of nondrug therapy such as passive stretching or acupuncture (among many others) are also commonly used.

The study was funded by Chinese government and foundation grants.

Authors declared they had no relevant financial interests.