— A brief guide through diseases of the myocardium 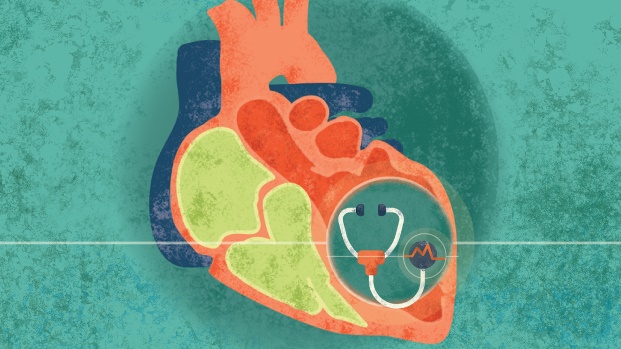 « Medical Journeys » is a set of clinical resources reviewed by physicians, meant for the medical team as well as the patients they serve.

Each episode of this 12-part journey through a disease state contains both a physician guide and a downloadable/printable patient resource.

« Medical Journeys » chart a path each step of the way for physicians and patients and provide continual resources and support, as the caregiver team navigates the course of a disease.

Cardiomyopathy is a fairly diverse group of diseases united in that they impact the myocardium.

The European Society of Cardiology defines a cardiomyopathy as « a myocardial disorder in which the heart muscle is structurally and functionally abnormal, in the absence of coronary artery disease, hypertension, valvular disease, and congenital heart disease sufficient to cause the observed myocardial abnormality. »

Symptoms largely follow those traditionally associated with heart failure: dyspnea on exertion or when lying flat, fatigue, edema in the lower extremities, syncope, weakness or lightheadedness, and cough.

However, unique characteristics of some types of cardiomyopathy can provide clues to identification.

How is Cardiomyopathy Classified?

The most common cardiomyopathies are dilated, hypertrophic, and restrictive cardiomyopathy, although the 2006 American Heart Association (AHA) scientific statement that laid out the definitions and classification scheme for the cardiomyopathies acknowledged « the exceedingly complex » and « considerable overlap encountered between categories into which diseases have been segregated. »

In restrictive cardiomyopathy, the heart becomes stiff, scarred, or both.

It typically presents with classic symptoms of heart failure, such as ascites, peripheral edema, and elevated jugular venous pressure.

Arrhythmias and conduction disturbances are common as well.

In idiopathic cases, up to one-third of patients may present with thromboembolic complications, as a review in the New England Journal of Medicine notes.

Dilated cardiomyopathy is characterized by an enlarged and poorly contractile left ventricle in the absence of hypertension, valvular, congenital, or ischemic heart disease.

Symptoms can range from none to those typical for heart failure with reduced ejection fraction.

Signs may also include the third heart sound (S3) on auscultation of the heart for dilated cardiomyopathy with dilated ventricles.

For some subtypes, arrhythmias may be the first sign.

Syncope, due to arrhythmia or abnormal responses of the blood vessels during exercise or even no apparent cause, was reported in some 3% of dilated cardiomyopathy patients in one study from India.

Slow blood flow can lead to thromboembolism as well.

Myocarditis — inflammatory cardiomyopathy — can stem from a variety of toxins, drugs, and infections, gaining popular notoriety as stemming from COVID-19 or, rarely, from vaccination against it.

While often asymptomatic early on, characteristic signs and symptoms include atypical chest pain, such as during meals, dehydration, or on exertion; dyspnea and fatigue, especially in adults upon exertion; and sudden cardiac death.

Signs may also include the fourth heart sound (S4) on auscultation of the heart.

Arrhythmias are common, with paroxysms of supraventricular tachycardia and atrial fibrillation on Holter monitoring reported in up to 30% of adult patients in a study from Italy.

For these three main categories, the AHA acknowledged that patients can shift from one to the other as a consequence of remodeling in the natural course of their disease.

For example, hypertrophic cardiomyopathy, amyloid, and other infiltrative conditions can progress to dilated cardiomyopathy with systolic dysfunction and heart failure, the document pointed out, noting that quantitative assessment of ventricular size is also a continuum, making rigid distinction between dilated and nondilated cardiomyopathies difficult.

Ischemic cardiomyopathy, despite being a commonly used term, was not supported as a category of cardiomyopathy by the AHA classification system, which excludes myocardial pathologies and dysfunction that are a direct consequence of things like ischemic myocardial damage secondary to impairment in coronary flow from atherosclerotic coronary artery disease.

What Are Less Common Types of Cardiomyopathy?

Some 15% of heart failure in older adults may actually be unrecognized transthyretin amyloid cardiomyopathy (ATTR-CM), in which misfolded transthyretin (formerly known as pre-albumin) protein forms deposits in the myocardium.

Arrhythmias and other conduction system disease may show up years before this type of cardiomyopathy progresses to heart failure, typically with preserved ejection fraction, as a longitudinal study from Italy showed.

Other early features can include carpal tunnel syndrome or other neuropathy and lumbar spinal stenosis. ATTR-CM can sometimes present with vitreous opacities, as a state-of-the-art review notes in the Journal of the American College of Cardiology.

Stress-induced or takotsubo cardiomyopathy is characterized by left ventricular apical wall motion abnormalities brought on by emotional or physical stress that typically resolve over days or weeks.

The symptoms can be « indistinguishable from acute coronary syndrome » or can show up as electrocardiogram changes and wall motion abnormalities on echocardiogram after neurologic injury, notes a review in Critical Care Medicine.

Affected patients are often asymptomatic initially but then have a progressive decline in left ventricular ejection fraction several years later.

Peripartum cardiomyopathy is defined by idiopathic systolic heart failure in the last month of pregnancy or within 5 months of delivery period but has also been seen between the 17th and 36th week of pregnancy, suggesting a continuum of disease, according to a review in the Journal of the American College of Cardiology.

In one study from the U.S., the most common presenting symptoms were palpitations in 27%, syncope in 26%, and sudden cardiac death in 23%.

Up next: Diagnosing Cardiomyopathy

Crystal Phend is a contributing editor at MedPage Today. Follow